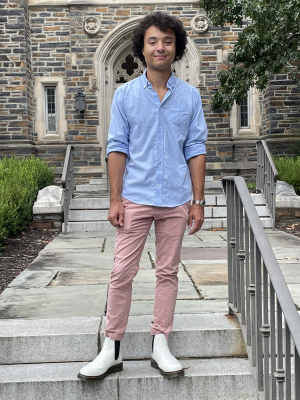 Nicholas Bayer is a senior from Queens, NYC, Majoring in English and Political science while Minoring in Creative writing. When not reading, he serves as President of the Duke Debate Society. For fun, Nick is a foodie; he can tell you all of the best places to grab a meal in Durham. Nick’s favorite classes within the major have been the creative writing workshops and his current class on Milton. Nick is happy to talk through anything English-related, or Duke at large! 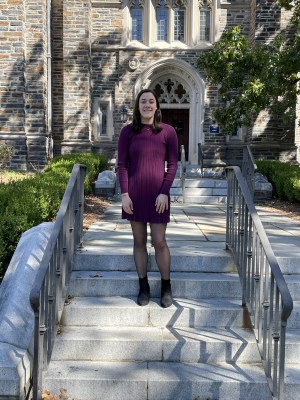 Sophia is a senior from Rye, New York, majoring in English with a Certificate in Markets & Management. Her favorite classes within the major include Modern American Drama, Crime Literature, and various creative writing workshops. During fall 2021, she studied First and Second World War Poetry at the University of Oxford. Sophia enjoys reading and writing poetry, applying her English skills to her business interests, and chatting anything and everything English! 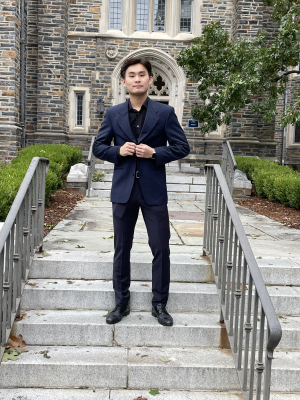 Stephen Kim is a junior from New York, New York majoring in English and minoring in VMS Cinematic Arts.  He is on the Duke Division I Men’s Fencing Team and was an internationally ranked fencer in high school.  Stephen chose the English major because he finds linguistics, literature, and writing fascinating.  At the moment, Stephen particularly likes the works of John Milton, but he enjoys a wide variety of literature spanning multiple centuries, including works from David Henry Thoreau, F. Scott Fitzgerald, Gabriel Garcia Marquez, and George Orwell.  In the near future, Stephen intends to expand his horizons by reading more Latin American and East Asian literature, as well as philosophy and religion.

After graduation, Stephen plans to pursue a career in the film & television industry, a field of great interest to him since childhood.  He believes an English degree will strongly prepare him for the crucial communicational and writing skills required in the workforce.  Stephen also loves learning languages and currently speaks three fluently: English, Korean, and Spanish.  He enjoys traveling and living abroad, having spent extensive time in South Korea since the age of eleven, where he attended school.  Recently, he began studying Levantine Arabic and hopes to visit Jordan sometime over the next few years. 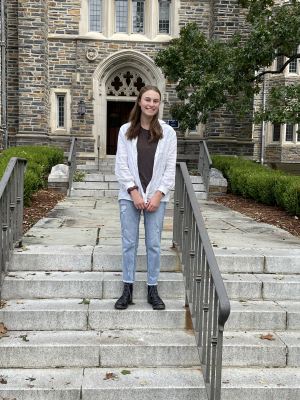 Maddie Rubin is a junior from New York, majoring in English and Risk, Data & Financial Engineering with a minor in Computer Science. Her first couple of years at Duke were spent coding away in electrical engineering labs, but, after enrolling in an English course on a whim, she has rediscovered her love for writing. Her favorite course so far has been Bob Dylan, and her favorite course right now is creative non-fiction. She also can’t have a conversation without mentioning she spent this past summer at the University of Oxford learning about Victorian Literature under the tutelage of a knight. On rare evenings, Maddie can be found in the back corner of comedy shows around Durham, and, for the past four years, she has been trying to teach herself a singular song on the guitar.  She see’s a lot of potential in the intersection between literature and technology, and she would love the opportunity to convince fellow Pratt stars to come and join her over in the humanities. 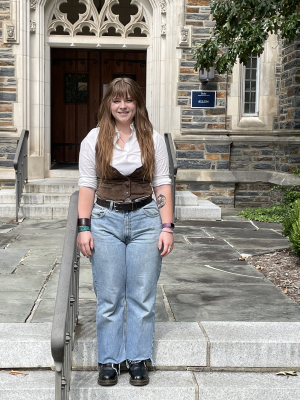 Kayla Smith is a senior from Angier, NC majoring in English and minoring in Russian. She fell in love with studying English literature after taking a course on William Faulkner during her freshman spring, and she hasn’t looked back since! Studying English has taught her to think critically about written works but also about all the information and people she comes into contact with in the world.  English literature has played a critical role in Kayla’s life, informing her not only as a reader and writer but as an individual within an ever-changing society that no computer codes, nor methods of statistical analysis, nor any other “factual” facts, as useful as they are, can effectually assimilate. Her favorite authors are Fyodor Dostoevsky, Vladimir Nabokov, Joyce Carol Oates, and Thomas Wolfe. She prioritizes asking questions and staying curious above having the answers and being in the right.

Creativity is central to Kayla’s being. She expresses herself through fashion, various visual arts, writing poetry/songs, singing, and playing music. She is also a writer and voice actor for Freshly Squeezed Pulp, a student-run team of creatives who annually write, direct, and produce a pulp fiction-based podcast show.  She is also involved in FORM Magazine, Small Town Records, and WXDU.  In her free time, she does yoga, listens to music, takes long walks, and pours her creative heart. 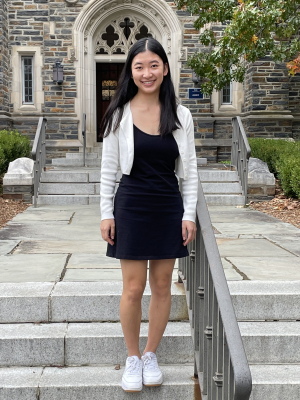 Claire Wang is a junior from San Diego, CA majoring in English and Psychology with a minor in Biology. Claire’s favorite English class so far is Grimm’s Fairy Tales taught by Dr. April Henry. The English major has helped her explore her passion for storytelling and its potential to empower and empathize; it provides broader historical knowledge and explores various cultural and ethical perspectives through the discussion of a wide range of literature showcasing different forms of communication, expression, and representation.

In her free time, she loves baking, traveling, going on food crawls in big cities, taking long walks, or just curling up with a good book in bed. Claire would love to answer any questions, either related to the major or about anything else at Duke! 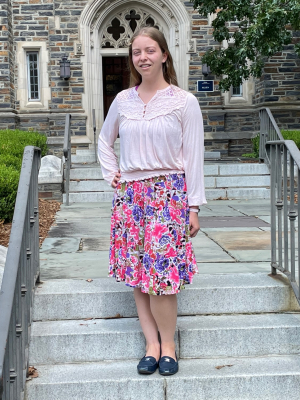 Anneke Zegers is a senior from Fair Oaks, California. She is majoring in English and minoring in Creative Writing and Latin. Anneke is a varsity saberist on the Duke Women’s Fencing team, but when she is not playing with swords, she can often be found reading a fantasy or historical fiction novel. Anneke also loves creative writing and aspires to be a novelist. She served as the President of the Duke Writers’ Collective—a student organization with monthly creative writing workshops and bi-weekly critique circles open to all Duke students—during her sophomore and junior years. She is also involved in several Christian organizations on campus, especially MakeNew Church and Summit College.

One of Anneke’s favorite aspects of English classes is the seminar teaching method, in which students of various backgrounds and perspectives unite to discuss a single work. She also finds the English Department remarkable for its wise and thoughtful faculty, who are eager to help their students understand difficult texts and explore their particular interests. Her favorite experience as an English major was attending Duke in Oxford over the summer of 2022, in which she studied British Victorian literature and drank lots of tea.

Anneke is especially interested in early modern and Victorian literature, but she is not opposed to reading books from any culture or time period. Some of her favorite works of literature are Agamemnon by Aeschylus, Wuthering Heights by Emily Bronte, Hester by Margaret Oliphant, and East of Eden by John Steinbeck. Anneke hopes to inspire other students to read more often and to explore a diverse range of genres, engaging with perspectives and experiences unlike their own.