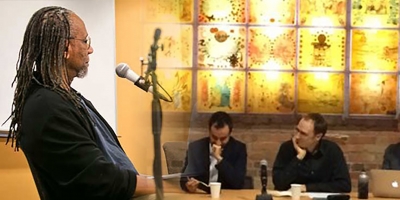 The doctoral program in English is small and highly selective. We typically admit 8-10 students per year. Known for its innovative and influential approaches to the study of literature, our doctoral program is dynamic and challenging within a collegial atmosphere of intellectual exchange. Our students are encouraged to read broadly across English and American literatures including four-nations British, Anglophone and comparative postcolonial, the Black Atlantic, Irish and other diasporas, multilingual North America, and pan-Pacific. Students investigate literary and cultural history as forms of knowledge production and social action; to develop the specific linguistic, philosophical, and historical skills relevant to their chosen field and intervention; and to think and articulate with clarity, subtlety, and imagination.

Particular faculty interests currently cutting across the chronological and geographical categorizations of literature include examples such as the cultural work of memory; whiteness and orientalism; mourning and trauma; the history of the book and other media, especially the visual arts and film; performativity and the sensorium; religion and political theory; science and technology. Not only is the faculty's own work uniquely interdisciplinary (nearly all the graduate faculty have joint appointments with other programs and departments including Cultural Anthropology, Religion, African and African American Studies, Germanic Languages and Literature, Theater Studies, the Program in Literature, Women's Studies, The Center for Medieval and Renaissance Studies) but students may take courses in other departments with few restrictions. The flexibility of the program, together with our encouragement of an interdisciplinarity driven and defined by the curiosity and intellectual interests of students, encourages exciting and unanticipated conjunctions in intellectual work -- between, say, queer and marxist theory, or between medieval and Latin American studies, film and Victoriana.

There is no terminal MA program in Duke's English department.