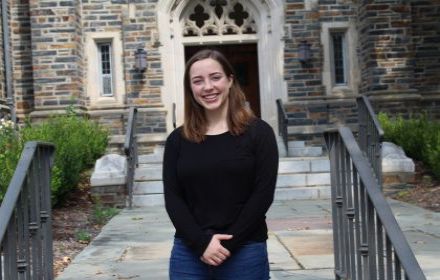 Bailey Bogle is a junior from Greensboro, North Carolina, majoring in English and minoring in philosophy. Bailey has a love for languages, and she is the founder and president of the Duke American Sign Language club, through which she also advocates for the creation of an ASL department. When she’s not working for Duke ASL, Bailey also enjoys writing poetry and waiting in line for basketball games. This past summer, she conducted research on Defoe’s Robinson Crusoe with a small research team supported by the Franklin Humanities Institute, where she helped create an educational website and curate two museum exhibits commemorating the 300th anniversary of its publication. Bailey also studied Victorian literature in Oxford, United Kingdom this summer. She has loved her time as an English major at Duke, and feels that it has helped her to grow as a writer and critical thinker. Bailey is happy to talk with any prospective majors about her experiences with the English department. 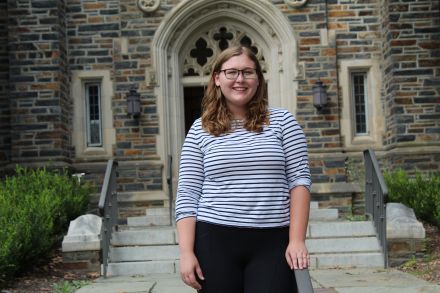 Meg Hancock is a senior from Paducah, Kentucky, majoring in English and minoring in Theater Studies and Art History. She’s currently working her senior distinction project on Southern literature, so you can often find her standing in front of the Faulkner section on the fourth floor of Perkins. Meg is involved with theater on campus, serving as dramaturg for three mainstage productions and as the directing liaison for Duke Players. She is also co-directing All of the Above in the spring. She’s shared her love for literature during her internships with 836 Boston’s creative writing center and the Partnership for Appalachian Girls’ Education. She has loved every class she’s taken in the English Department, but particularly loved her gateway course and her class on American crime. She feels as if being an English major has not only improved her writing and critical thinking skills, but it’s made her a more empathetic and curious person. She would love to talk to any prospective majors or students about English or Duke in general! 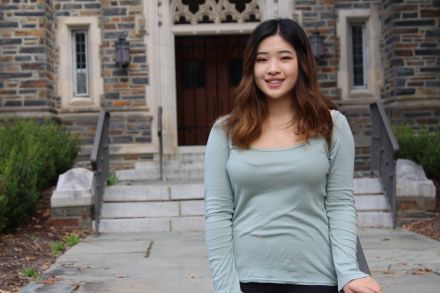 Julie Peng is a junior from Cambridge, Massachusetts double majoring in English and History. At Duke, Julie is the Secretary of the Debate Team where she argues excessively with friends. Julie spent the past summer as an intern at the Boston office of Senator Elizabeth Warren (D-Mass). In her free time, she loves to read, paint, and trounce people in Bananagrams. Some of Julie’s favorite books are The World According To Garp by John Irving, China In Ten Words by Yu Hua, East of Eden by John Steinbeck, and authors she particularly admires include James Joyce and Sylvia Plath.

While many English classes have brought her great joy, Julie cites James Joyce with Aarthi Vadde and mid-1800s classics of American literature class with Michael D’Alessandro as her favorites. Julie believes that there is immeasurable value in studying English and encourages anyone considering the major to challenge themselves and look beyond reading as a hobby. The rigorous classroom environment is conducive to reading canonic works, and guidance and experiences of a professor and classmates is necessary. Julie can’t wait to see the Duke English department flourish! 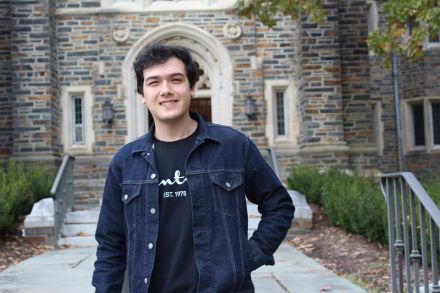 Duncan Yul Gweon de Caire is a senior English major, with a minor in Creative Writing and a certificate in Arts of the Moving Image. He was born and raised in Sacramento, California, and attended Mira Loma High School where he published several poems in Prisms, the school’s literary magazine. During this time, he also fenced competitively on the national and international level and made a short documentary film about the sport.

At Duke, Duncan continued to fence as a member of the varsity fencing team. He placed 13that NCAA Championships his freshman year and won the ACC Men’s Team Championships his sophomore season. While he did not initially intend to be an English major, he quickly changed his mind after taking his first few classes in the discipline. He has maintained his interest in creative writing and filmmaking while at Duke, writing a number of poems and short stories as well as making a documentary about Asian Hip Hop. His professors have been highly supportive of these passions, and currently he is working on a collection of short stories based loosely on the experiences and history of the Korean half of his family. He feels what he has most gained as an English major at Duke is the ability to garner unique perspectives about the world and the chance to immerse himself in humanity’s literary tradition. Some of his favorite readings from class have been Vanity Fair by William Thackeray, This is How You Lose Herby Junot Diaz, and Time’s Arrow by Martin Amis.