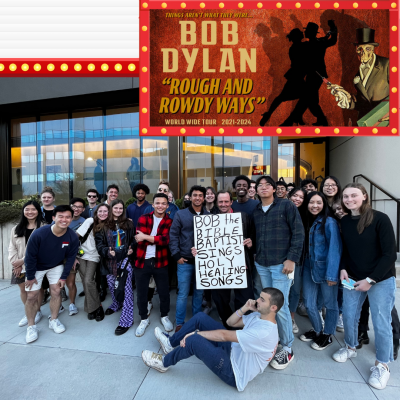 Traditionally when one thinks of a college English course, they would not be surprised to study someone who has won a Nobel Prize in Literature (2016) and a Pulitzer Prize (Special Citation, 2008).  What about someone who has won Grammy Awards, Kennedy Center Honors, the Presidential Medal of Freedom and even a Golden Globe for Best Original song? Surely, that would make sense for a Music class, but in English? In Professor Taylor Black's English 290S-01 course, "Bob Dylan," however, you get both and so much more.

This semester's class even attended a live Dylan concert, an experience which, as one student put it, completely brought the course and the time digging into Bob Dylan’s work, which has transcended more than six decades, full circle.

“Bob Dylan’s musical catalog is full of weird and wonderful songs that resist easy interpretation. And the same is true of the man himself, who plays the part of “Bob Dylan” differently every time he steps on stage. These things have to be experienced to be truly understood and my Bob Dylan class is about curating that experience for my students. Thanks to some help from Dean William Johnson, my current class was lucky enough to travel to Greensboro, NC to see Bob Dylan’s concert. Dylan delivered himself up to us totally and the show was great! But it was truly special for me to be able to experience the concert in the company of this group of very cool and absolutely attuned Duke students.  – Professor Black

This is the third time Professor Black has taught his Dylan course during his time at Duke. However, this was the first time the course coincided with Dylan's tour "It was obviously incredible for us to be in the presence of our object of analysis. As always, he did not disappoint," stated Black. Several of the students in attendance mentioned that the Dylan experience went beyond the concert and the environment his fans created at his show. All of them mentioned the street preacher they encountered who feels that Bob Dylan is a prophet. The students encouraged Professor Black to invite the preacher to join them for the show since they had an extra ticket, and he wasn’t going to attend otherwise.

Black's students were excited and willing to share their thoughts about going to see a live concert for a college class as part of an academic learning experience.

"It was one of the best and most memorable experiences of my life, no exaggeration. I've always loved music and have always appreciated Bob Dylan, but this class has brought me closer to Bob Dylan, the person, and Bob Dylan, the artist, than I've ever been to another musical figure. Seeing him in real life, has a special significance."
– Gautam Iyer, ’23, Public Policy with minors in Computer Science and English

‘I had never seen Dylan, and my anticipation was high. We didn't know which Dylan we were seeing; would it be the old man simultaneously angry at and infatuated by the world and his unique place in it? Or perhaps the mystic/prophet, the voice of a generation alien to us? It was an entirely Bob Dylan experience, from the man we met outside with a sign declaring Dylan a "Baptist prophet" to the spontaneous, unexplained curses Dylan mumbled into the mic throughout the show's first half. Bob Dylan is quite the talent.”- Maggie Wolfe, ’25, History Major

Other students noted the combined effect the course and the concert had on how they think about writing – both their own and the writing they encounter in different media – and on their own academic goals:

The concert was a great addition to the class as part of what we discuss in class is how Dylan experiments with his music. It was surreal to see him do it in front of us. There was an emotional connection to seeing him perform songs in person that we studied in class. The audience and environment enhanced the overall experience.” - Maddie Rubin, ’24, Engineering and English major

When asked why she chose to enroll in the class, Rubin stated that she had listened to Dylan's music in the past but was not a huge fan. She did, however, find the opportunity to study something different from her engineering courses appealing. "It is the most rewarding class that I have taken at Duke, and it has inspired me to add English as a second major," said Rubin.

“It is one thing to listen to an artist and another to see them live and truly experience their personality gave insight into what they have studied in class. Especially with an artist like Dylan who each time he performs a song it is different although it has the same message." - Kaley Sperling, '24, Environmental Science major

Sperling said that she plans to tell anyone interested in taking the class, "If ever they have the option to take the class, they should do so. It is totally unique to be able to take an English class about a musician. It has helped me broaden my writing style and allowed me to express myself in creative and new ways." She is considering adding English as a minor.

Professor Black will be co-teaching a course on "Southern Musical Traditions and Practices" during the Spring of 2023 with Sophia Enriquez in Music for anyone interested in taking a related course.