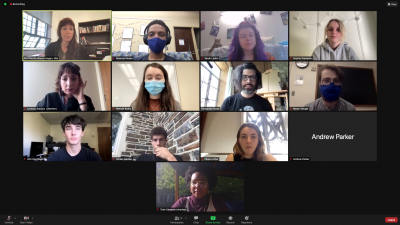 This fall, Welsh novelist Sophie Mackintosh, American poet Gabrielle Calvocoressi, and Mexican novelist Fernando Flores visited Professor Maren’s English 290S class, “World Building: From Genesis to Lil Nas X.”  Students had the opportunity to ask these authors questions about elements of their writing.  Each writer shared their experiences with working through pieces from beginning to end, including how they overcome writer's block or editing concerns.

Professor Maren explained why she selected these particular writers:

By bringing these three authors into my classroom to give lectures and answer questions, I hoped to enhance three key learning objectives, namely the ability for student writers to interact with current living authors in multiple genres, the ability for students to understand how a text is crafted through drafting and revision and the ability for students to place their own writing in the context of the canon. By bringing in a Welsh novelist (Sophie Mackintosh), an American poet (Gabrielle Calvocoressi), and a Mexican fiction writer (Fernando Flores) I hoped to expose students to a breadth of styles and genres. I have also selected these three authors because they are all at markedly different places in their careers (early, mid, and established) and would, therefore, be able to bring different publishing and career expertise into my classroom. – Mesha Maren

Maren's students were excited to hear the authors talk about their writing inspirations and publishing experiences. Students  asked questions that dug into character development in the works they were reading for class and how editing altered these works between the first draft and the published version.

We are exploring techniques for creating speculative fictional worlds in my "World Building" class. The worlds that Mackintosh and Flores built in their novels are very different and therefore provide two distinct examples for my students. I was also interested in the fact that Sophie Mackintosh is a Welsh writer living in London and Flores is a Mexican novelist living in Austin, Texas. I wanted to present my students with diverse examples of speculative writers.  –  Mesha Maren 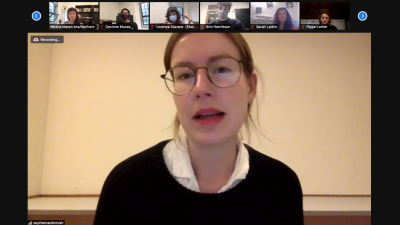 Sophie Mackintosh began her virtual visit by talking about her debut novel, The Water Cure, which students had read for class, she then opened the session up for Q&A.  Students inquired about how she got started writing The Water Cure, and how the novel changed with each draft. They were also curious about the type of relationship she has with her agent.  Mackintosh talked to the class about the freedom of copying and pasting allows in modern-day writing, and how the first draft process can feel like the "honeymoon phase." She shared her thoughts on how to determine when to let go of an idea when it is in the way of progressing with a piece.  Mackintosh shared that getting different perspectives in the proofreading and editing process has been beneficial in her writing experience.  As the conversation continued, the Welsh novelist advised students that, while a blank page can be intimidating, they should view it as an opportunity, and that they should expect their work to change with each draft.

Although The Water Cure was the first novel Mackintosh published, it was not the first novel she wrote. This first novel remains unpublished, and she shared this experience with the class to reassure them, telling them not to get discouraged if their first attempt to get published is unsuccessful. 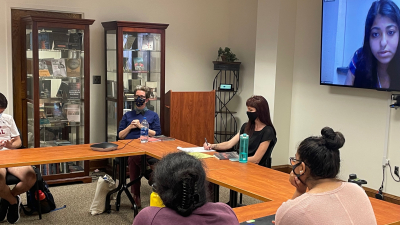 Gabrielle Calvocoressi, a local poet, visited Maren’s class in person.  In preparation for Calvocoressi's visit, Professor Maren's class read poems from the poet's book titled Rocket Fantastic.   They shared how other art forms often aid in poetry writing and how painting and watercolors helped them work through some writing issues.  When asked how they work through bringing a poem to a conclusion, Calvocoressi stated that sometimes they just end it, and there are times when they turn to drawing or painting, which allows them toward bringing the poem to a close.

Several students commented on how much they enjoyed having the poet in class and the benefits of picking the brains of writers whose works they had just studied.

Gabby's visit to our creative writing class was phenomenal and helped their poems come to life with totally new meaning, which was exciting. Learning from their creative process, talking through ideas as a class, and pondering the ideas of writing as a collaborative group was so fulfilling and helped me think about my creative writing process with more energy. Gabby was engaging with our class from the moment they stepped in the room and helped everyone feel heard and celebrate their creative ideas. Gabby's guest lecture was an incredible experience and one that I will carry with me well into the future!  - Sara Kate Baudhuin, '22

After reading and analyzing some of Gabrielle Calvocoressi's poems in class, it was an incredible opportunity to hear Gabby talk about how these poems came to be. Gabby's visit brought the poems to life and helped me understand them in new ways. The visit also made me re-evaluate how I think about the writing process and approach assignments. – Toni Iuzzolino, '22

It was neat to get insight into a poet's process and thinking, especially since we read their work already! -  Joe Cullen, '22

The novelist Fernando Flores's visit, conducted over Zoom, was focused entirely on a Q&A session.  Novelist Fernando Flores elected to make his visit a Q&A session.  Professor Maren's students were excited to have the opportunity to ask the author about the surreal elements in his work.  Flores shared with the class that he was deep into writing the novel, Tears of the Trufflepig,  when he finally decided on the direction he wanted for it. 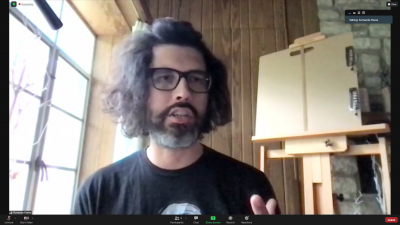 When asked about his use of metaphors in the novel, the author responded that it allowed him to have a balance of maximum and minimalism in the story. He noted that the contemporary fiction allows him to incorporate serious issues into his work while utilizing an imaginary world. Flores referred to Tears of the Trufflepig as an anti-research piece that allowed him to rely on his imagination.  As to why there is no illustration of the "truffle pig" on the book cover, Flores explained that he wanted his audience to use their imagination to develop the character.

For the last three semesters Professor Maren has been able to invite guest lecturers to her creative writing classes through the generosity of the David L. Paletz Course Enhancement grant.

Videos of each lecture and those of previous semesters are available on the David L. Paletz Creative Writing Guest Series page on the English website.