This spring, Duke English has had the honor of hosting Kenyan author and journalist Peter Kimani as its Blackburn Artist in Residence. His novel, Dance of the Jakaranda – a New York Times "Notable Book of the Year" – was nominated for the Hurston/Wright Legacy Award and the inaugural Big Book Award in the UK. Kimani currently writes a weekly column for The Standard.

During his time with the department this semester, Kimani  taught two fiction writing courses:

Reika Shimomura, a class of 2023 Global Health and Biology major, took Professor Kimani's "Introduction to Fiction" course this semester; she loves to read science fiction and enrolled in the class because she thought it would be wonderful to envision the future through her own writing. Shimomura shared that she initially had concerns about taking the course because of her lack of experience with writing fiction. However, Professor Kimani erased her concerns through the writing process he has taught the class:

"Unlike academic writing, there is no set of structures that I can follow to get it started, and unlike writing an article, there was no existing story to retell. The complete freedom of writing made it difficult for me to get started, but Professor Kimani's tips have guided me through. Professor Kimani often tells us what is not on the page is what is unknown to the readers, and readers tend to try to read between the lines to get to the heart of what the writer is trying to say. However, Professor Kimani reminded us that we, as the writer, control what the readers know. Not including an essential element to a story will leave the reader lost.” - Reika Shimomura 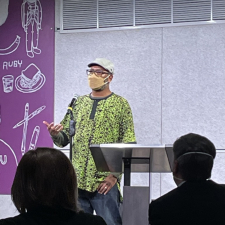 In February, Kimani gave a talk at the Rubenstein Arts Center, reading from Dance of the Jakaranda.  Beginning in the early years of Kenya’s independence from England, Kimani’s novel reimagines the coming together of men from different ethnicities and cultures, and Kenya’s development as a nation, through the construction of the railroad. Kimani shared with the audience that his novel looks at seventy years of Kenya's history, with music and the railroad as central elements. Kimani closed his reading with a line from Dance of the Jakaranda that is meant to be sung.

The line is part of a love letter that expresses the writer's hope that the one he loves survives the world. The letter warns the reader about the world so that they don't get lost in it and educates them against the world's perils. Kimani also spoke of Nairobi Noir, a collection of fifteen stories by Nairobi natives, including his piece "Blood Sister," in which he challenges established narratives about Nairobi.

During the Q&A session following Kimani's reading, he shared that his works are historical fiction which developed from his curiosity about specific moments in history. He noted that his writing often challenges the narrative as it has been told because it is usually only told from the viewpoint of the colonizer. Kimani, on the other hand, looks to tell the story from the perspective of the conquered.

"I use fiction to return to moments of my country's history,” Kimani stated. “One can't rewrite history, but you can reimagine it." In his work he attempts to capture the oral history of Kenya and, through this study, help teach its history from the viewpoint of those whose voices have not been shared with the world.

Kimani also spoke of his experience as a journalist and how it has allowed him to travel all over Kenya. Kimani explained to the audience that this experience enables him to incorporate the influence of areas throughout the country into the nationhood he illustrates in the multi-generational nature of Dance of the Jakaranda: the railroad at the core of the novel spans the whole nation, and the narrative spans over 70 years resulting in a story told from the perspective those from many places and in many times.

This multifaceted perspective, born of both his journalism and novel writing, is key to Kimani’s work. During the Q&A, he was asked about the relationship between his fiction and his  experience as a journalist. His initial response was that journalism and creative writing feed off one another. Kimani shared his opinion that journalism teaches one to write with precision because you have to meet deadlines or not get published. He stated, "As a journalist, you observe a lot that others might overlook. The regular work of journalism makes a better fiction writer as it sharpens one's pen."

Of his time here in the English department, Kimani wrote:

"My time at Duke as the Blackburn Artist in Residence has been immensely productive and rewarding. I have been able to keep my writing going, which was nourished by students' writings and class discussions. At times, writers feel resentful if their valuable time is primarily spent in the classroom, not in their writing. Fortunately, I was able to integrate my teaching and writing. Whether returning to old texts or picking new ones, I was enthralled to re-experience the magic of fiction at the same time as did my students. Talking of whom, I have no doubt I will miss my students and our exchanges, so I'm hopeful our conversations will survive post-Duke, waiting to see where our stories take us next." - Peter Kimani

The Blackburn Endowment funds the Blackburn Artist in Residence, established in 1990 by friends, colleagues, and former students in memory of Professor William Blackburn to ensure the tradition of creative writing in the English Department at Duke University continues.