Black Lives Matter: How an English Class Became a Hub for Conversations on Race and Progress 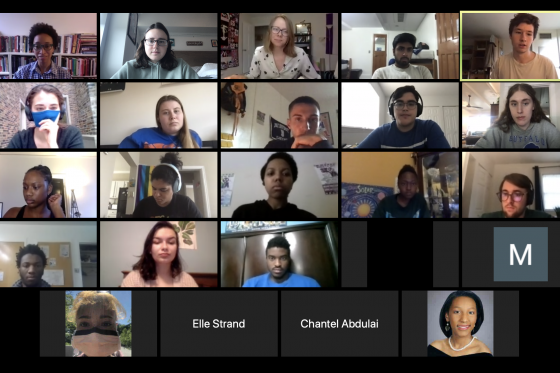 In the midst of a global pandemic and daily protests over the death of George Floyd, Professor Tsitsi Jaji had a realization.

She was slated to teach African Diaspora Literature in the fall, a cross-listed course in the English and African & African American Studies departments. An associate professor of English with expertise in African and African American literature and cultural studies, Jaji had taught this course, or similar variants, numerous times before.

But something was different this time around. Jaji tinkered with the syllabus, adding new readings and adjusting the class focus. By the time students signed up for their fall courses, African Diaspora Literature was reinvented, complete with a new title. African Diaspora Literature: Black Lives Matter had become a one of a kind course, tailored to the present moment.

Reacting to the moment

There was no single factor that led Jaji to her decision to adjust the course, she said. The nationwide anguish following the deaths of George Floyd and Breonna Taylor at the hands of police officers undoubtedly played a large role. So did a powerful letter from Black graduate students at Duke published in the Chronicle on Juneteenth.

And then there was the coronavirus, a deadly disease that was disproportionately killing Black and brown people.

Jaji understood that it would be impossible to study the lives and cultures of Africans and African Americans without confronting the racial tension building across the country. “The questions that I'm thinking about and the sense of meaning that I find in my work naturally dovetail with this moment,” she said.

Jaji set out to build a syllabus that almost exclusively consists of works by Black women. While her course isn’t specifically about the Black female experience, it is Black women who are at the forefront of the Black Lives Matter movement, Jaji said.

Even though some readings from the original syllabus were removed, Jaji opted to include certain aspects of the initial curriculum. It was important to maintain an international focus and to include Black voices from across the globe, Jaji said. While U.S. race relations are often the focus of the Black Lives Matter movement, they don’t tell the complete story.

“Race is a global, historical construction,” Jaji said. “So you can’t really understand race in America without understanding colonization in Africa, or how other populations are racialized.”

One of the first readings Jaji assigned her students was an article titled “Racism is Terrible. Blackness is Not,” by Imani Peri. Published in June 2020, the article is a reflection on America's current struggles with race.

Peri’s article touches on essential ideas embodied in Jaji’s course, Jaji said. By exploring and studying Black literature, poetry and film, we can all develop a deeper understanding of why and how Black lives matter. “This class is focusing more on how an in-depth understanding of Black cultural production gives us that sense of ‘racism is terrible, blackness is not,’” Jaji said.

And for the first time at Duke, Jaji is teaching a course about blackness to a group of students who are not almost entirely Black.

Last year, nine students enrolled in African Diaspora Literature, and only one was white. This year, the course is full: there are 25 students, and about half are white.

Jaji was surprised not only by the size of her class, but also by the racial diversity. Aside from creative writing courses, Jaji has never taught a class with this many white students, she said. Teaching African Diaspora Literature: Black Lives Matter has shown Jaji something unique about the present Black Lives Matter movement. More white people are mobilizing for racial justice, educating themselves and taking to the streets.

“I’m starting to understand the way in which this matters for white Americans that I don't think I would have understood without this class,” Jaji said, “and that’s very gratifying.”

In a society with deep implicit biases and an English department that currently has no requirement to study African diaspora literature, Jaji chooses to be optimistic about white students’ participation. “Anybody who voluntarily chooses to take a course like mine is automatically extraordinary,” she said.

But she firmly believes that all Duke students should spend time studying the African diaspora. “If a student graduates without having engaged with the cultural production of what constitutes the global majority, people of color, then they have been hobbled and poorly served,” Jaji said.

Lingering on what white people have or have not done to uplift their Black peers in years past is not a productive use of her time, Jaji said. “I don’t have enough energy to resent these things, honestly,” she said. “We need all the energy that we have.”

Difficult conversations are the norm in Jaji’s course. As one of her students, I can attest to the sincerity and vulnerability with which we approach our readings and discussions. In my opinion, the level of thoughtful engagement is remarkable.

Maggie McDowell, an English PhD student and TA for the class, noticed the same. “There’s truly stellar personal engagement from everybody,” she said. “Talking about race in the classroom can be uncomfortable, but I feel like everyone is developing more of a level of comfort in knowing how to start these conversations.”

“Everybody is so aware of the moment and mindful of each other,” she added. “I feel really privileged to be able to learn from all of you and see you all interact and listen to Professor Jaji.”

Part of the discomfort stems from white students’ uncertainty about their role in conversations about race. McDowell, who is white, said she values Jaji’s focus on bringing everyone into the discussion.

I am sometimes wary of sharing my own perspective, concerned that I am taking attention away from the Black experience. I’m sure many of my white peers can relate. But racism is not a burden to be shouldered exclusively by the Black community.

“Not wanting to feel like we’re taking up space I think is a generous and conscientious instinct,” McDowell said, “but actually might be preventing white people from recognizing that they’re also called to do this work.”

White people might also worry about saying the wrong thing, or unintentionally being insensitive. McDowell said that Jaji addressed this during a meeting of the faculty committee that was recently established to think about the experiences of Black English graduate students at Duke.

Jaji explained that unless people are willing to speak up and possibly make mistakes, no one can learn from each other. “Even though there’s a fear of hurting other people, there has to be a recognition of the pain that’s already there to be able to move through it,” McDowell said.

Jaji brings the same attitude to her course, encouraging everyone to speak up. But the class dynamic is still a little different than what most white students are probably used to. “We’re so used to seeing ourselves in fiction,” McDowell said, but in Jaji’s course, we don’t read about white perspectives.

For white people, it’s easy to take for granted how often we see ourselves represented in novels and other media. In Jaji’s class, it is most often Black students who can personally relate to the texts and films we discuss. But that doesn’t mean white students can’t or don’t participate.

“I really appreciate the way that she's been able to frame it as everyone’s responsibility to be having these conversations,” McDowell said of Jaji’s approach to the course. “She really invites everybody to the table."

McDowell said that her role as a TA has involved a fair amount of tech coaching, ensuring that breakout rooms and screen shares go smoothly. But there are some obstacles with online learning that are harder to work around.

Zoom makes it more challenging for a professor to read the room, and guage the mood of the students and the discussion, McDowell said. “Unless you’re in gallery view all the time and really paying attention to all 25 squares, it’s really hard to get that,” she said.

While teaching online might make it difficult for a professor to connect with their students, Jaji is intentional about getting to know us. She said she often spends five to six hours speaking one-on-one with her students during office hours.

And Zoom has brought about some unexpected advantages, too. The class utilizes the chat function to share additional ideas and respond to other students. Jaji, McDowell and myself are all in agreement that the chat adds a new level of depth to each class meeting.

Specifically, the chat allows students who wouldn’t normally speak up to share their ideas freely. It also provides the opportunity to build on discussion topics without interrupting the current speaker. During project presentations one class period, I was amazed to see how everyone reacted in the chat. The enthusiasm students’ had for each other’s projects was indicative of the high level of engagement in the class, and we used the Zoom chat to support each other in a new way. “This is already amazing,” one student wrote during a presentation. “I was so excited for y'all to share this.”

Zoom doesn’t prevent students from connecting with each other. And Jaji said she’s noticed ways that online learning actually helps facilitate conversations. On Zoom, you see slices of a student’s life that you wouldn’t get in the classroom. Everyone is tuning in from their personal spaces.

“Everybody talks about how isolated we are,” Jaji said, “but then there’s this really strange intimacy, which I actually think is a very good context for trying to talk about difficult societal problems. There’s a way in which it just kind of makes us all aware of each other’s vulnerabilities and similarities.”

African Diaspora Literature: Black Lives Matter will culminate with individual, creative final projects. Each student is working on something unique, and the personal nature of these projects adds to the intimacy of the class. Jaji has been blown away by the creativity and care her students have given their work, she said.

“You guys have found ways to pay attention to Black lives mattering in really striking, beautiful, important, sometimes disturbing, but powerful ways,” Jaji said. “That's been very moving and very energizing for me.”