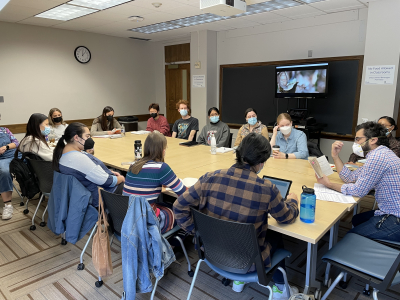 Do you read crime novels, find yourself scanning the daily newspaper crime report, or love watching true crime television shows? During the 2022 Spring semester, Professor Michael D'Alessandro introduced an updated version of English 290S-2.01, "American Crime, 1800-1914: Fiction and Film."  The concept for this course developed from research that Professor D'Alessandro conducted about nineteenth-century American crime, including some "eye-opening" statistics that left him horrified. He knew right away that, when the opportunity presented itself, he would love to teach a course that studies crime from different angles — the historical, the psychological, the anthropological.

Professor D'Alessandro describes the course as, fundamentally,  “About bad people doing worse things, and the class is constantly trying to figure out the motives for all these misdeeds during the nineteenth century."  The syllabus notes that the course is designed to trace how authors and filmmakers utilized formal experimentation to depict violent, nearly pornographic scenes of crime. It moves across Northeastern urban capitals of sin to dehumanizing Southern plantations through to the often-lawless Western frontier. Students enrolled in "American Crime" study a range of topics, including Edgar Allan Poe's tales of graphic murder, unsolved true crime cases, autobiographies of kidnapped enslaved people, and recent films depicting a blood-stained American West.

I decided to take this class because the description was unlike anything I had seen before in the English department. I was mainly intrigued by the subject matter (a deep dive into crime in America) and the discussion-based element of the class. The class is one of my favorites I have taken at Duke thus far. The discussions in the class provoke conversations that tackle critical issues; it is so much more than a class about robbery or murder. It calls on students to question motivations, American institutions, gender, and what constitutes a crime. More than anything, the class is an exploration of humanity. I have expanded my mind by thinking about what makes up humanity and human nature through the class materials and discussions.  Taking this class with Prof. D'Alessandro is a once in a lifetime experience.

Miranda Straubel, '24, an English and Education major, shared that she chose to enroll in the class because she thought the opportunity to study both literature and film would be fun. Straubel noted that the class comprises students from many different majors, each that providing diverse points of view that lead to exciting discussions. She also shared that the knowledge and enthusiasm Professor D'Alessandro brings to the course helps him facilitate great class discussions and broadens the traditionally accepted definition of crime literature.

When asked as the instructor what has he learned from the course and his students this semester, Professor D'Alessandro reflected, "I have an amazing group of students this term. They're eager, often quite witty, and don't hesitate to call me out. They have pushed me to become more cognizant of the social conditions that lead to crime—and how many of those conditions persist today. So lately, I've been thinking about how conversations around crime can prompt us to be both broader historical thinkers and more responsible citizens."

Ejuerleigh Jones, English Ph.D. candidate, and TA for the course shared some of her thoughts:

I think our discussions are lively and vibrant because of the tone Professor D'Alessandro sets for the classroom. He is genuinely interested in what students think and encourages them to think aloud, not only in words but also in disposition. A level of trust must be established to merit a student publicizing their thoughts. I think Professor D'Alessandro establishes that trust with his students. In fact, I'm also his student and have experienced this for myself.

I attended Professor D'Alessandro's class and witnessed him in action with a group of fully engaged students. During the class session they discussed Twelve Years A Slave, comparing and contrasting both the 1853 memoir of Solomon Northup told by the author David Wilson, and the 2013 Oscar-winning film adapted from Northup's memoir. Their discussion was centered around their thoughts on each medium, how each presented Northup's story, and how they compared and differed in their depiction of characters and the story being told. Members of the class discussed the strengths and weaknesses of each medium, including a close look at how the film version used sound, music, lighting, and acting to tell the story. They analyzed whether the film version did the book justice. One student pointed out that the film version is easier to get caught up in emotionally. Another student noted that when you watch a film, you see it through the lens of the creator, and there is a flatness to film that contrasts what the audience might interpret from reading the words on a page. The class seemed to agree that the movie was imperfect in their eyes since they had the advantage of reading the narrative and could see the elements that were omitted, those altered for the film, and the cinematic liberties taken to secure an audience.

“One of the great things about Professor D'Alessandro's teaching style is that he maintains a rooted discussion in the text but makes room for developing branches of thought that might lead to other places,” stated Jones, the class TA. “For example, students have consistently found points of connection between some of the nineteenth-century texts and present-day cultural issues and events. Ultimately, we return to the text and its context, but students are afforded the opportunity to assert their intellectual curiosity"

D'Alessandro shared that with future sessions of "American Crime," he hopes to take a deep dive into "understanding how crime has pervaded the contemporary mediascape, study the human attraction to gory and grisly stories, our fascination with unsolved cold cases or maybe the psychologies of madmen, all of which grew from this semester's student engagement. "American Crime, 1800-1914: Fiction and Film" will be offered again during the Spring 2023 semester.