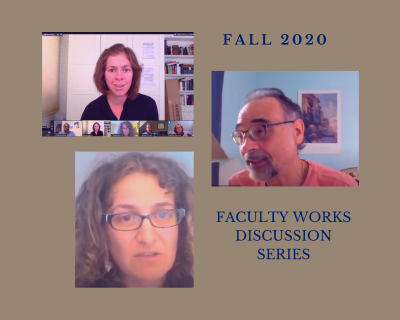 Throughout the Fall semester of 2020, the English faculty at Duke University participated in a series of discussions via Zoom to share with others what they are working on beyond the classroom.  The Faculty Work Discussion Series began in September with a presentation by Professor Thomas Ferraro and continued thereafter with monthly presentations by Professor Corina Stan and Julianne Werlin to follow.  The Faculty Work Discussion Series is an opportunity for students, staff, faculty, and anyone interested in learning about the work of members of the Duke University English Department. During the series, the featured presenter provided a brief introduction to their work, followed by a Q&A session about the presenter’s work.

The first installment of the series featured Professor Thomas Ferraro discussing his new book, Transgression and Redemption in American Fiction, which is now available for pre-order.  Professor Ferraro reveals an open secret that implicates almost all of America’s most revered modern novels for being what they have always been, namely, martyr tales of forbidden love, transgressive and redemptive in this work.

Ferraro shared that he envisions his former students reading this work, and their response to it being,

Hell, Ferraro really did know what he was talking about!

Professor Thomas Ferraro describes response he expects from his former students who read his new book.

The October installment of the Faculty Works Discussion Series featured Professor Corina Stan presenting On Tact in Dark Times.  As part of her discussion, Stan addressed several questions:  What exactly is tact, and what is its place in our highly polarized society? How is tact different from political correctness or a “woke” attitude? Can one be tactful when one is in a position or situation of inferiority? Can one be tactful all the time? What alternatives might we have?

During her presentation, Professor Stan shared the poem, which initially piqued her interest in “interpersonal distance and tact as a value.” “Patience” by Marin Sorescu is part of his Censored Poems collection.

The final installment of the Faculty Works Discussion Series for Fall 2020 was a presentation by Professor Julianne Werlin.  Professor Werlin shared insight into the project she is currently working on with Jane Harwell with the audience.  Their project attempts to set the literary history of early-modern England in a demographic context by creating writers' prosopography.

Werlin and Harwell plan to “come up with a list of writers (around 800, currently at around 200) and analyze them in terms of major demographic categories,” The project is still in the data collection phase.

Professor Julianne Werlin describes the project she is currently working on.

Jordan Diamond, '21, one of Professor Werlin's "Theory of Poetry" students, attended Werlin's discussion.  Diamond shared some of his thoughts about Professor Werlin's discussion. "I was impressed by the scope of her project, which she explained could take years to conduct as she assembled relevant biographical data on different authors."  He also noted that a question by Professor Stan piqued his attention.  Professor Wald inquired on whether Professor Werlin thought her research could push criticism towards the more biographical approach whose popularity has faded over time. Professor Werlin answered that she's not worried about it because many other scholars are working on renaissance study and criticism—so her project will offer useful context to other researchers without dominating research and critical approaches to this period.  Diamond noted that it was fascinating to hear about the disciplinary implications of Professor Werlin's project.

The Faculty Works Discussion Series will continue during the 2021 Spring semester.  The first 2021 Spring installment of the series is scheduled for Friday, January 22nd at 1:15 p.m. and will feature a presentation by Professor Joseph Winters.  Registration for Winters’ discussion will be available in early January.

You can watch each installment of the Fall 2020 Faculty Works Discussion Series in its entirety on the Duke English website.