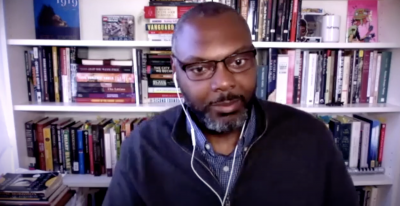 On Tuesday, March 29, Professor Derrick Spires of Cornell University visited the English Department as a guest of the Ad Hoc Committee on Anti-Racism.  Professor Spires visited virtually with a group of English Ph.D. candidates to discuss their work and offer advice.  Following his meeting with the graduate students, Professor Spires and Professor Jarvis McInnis, Cordelia and William Laverack Family Assistant Professor of English at Duke University, had a virtual conversation via Zoom centered around Spires’ book The Practice of Citizenship:  Black Politics and Print Culture in the Early United States.  The professors were joined by an audience consisting of members of the Duke community and other interested parties.

During his session with the group of Ph.D. candidates, Spires had everyone share where they are in their current work, as well as a “delight.” Spires had recently read Ross Gay’s Book of Delights, which inspired this addition.  To point out how important their current work may be, Professor Spires shared that a response paper he wrote for a seminar during graduate school was the basis for his book The Practice of Citizenship:  Black Politics and Print Culture in the Early United States.

“The graduate student conversation with Professor Spires was insightful and inspiring. Despite having widely different areas of study, we all found the introduction to The Practice of Citizenship insightful and legitimately applicable to our work. More importantly, Professor Spires was very kind and generous in the discussion. He was willing to talk about the text, the process of writing a book, things to consider when trying to get a job, the material conditions of 19th Century newspaper-making, and anything else we were curious about. It was cool to have that experience with Professor Spires and then to watch him really dig into the content of his work with Professor McInnis.” – Amber Manning, English, Ph.D. candidate

Professor Derrick Spires and Professor Jarvis McInnis are alums of Tougaloo College, a small HBCU (Historically Black College or University) in Tougaloo, MS.  Both professors are also alums of the UNCF Mellon Mays Program.  McInnis and Spires acknowledged Professors Dr. Jerry Ward, Dr. Candice Love Jackson, and Dr. Miranda Freeman, all of whom influenced their scholarly development at Tougaloo and took time out of their busy schedules to attend the virtual talk.

During the beginning of their conversation, Spires pointed out to the audience that the Black literary landscape of the 18th century and early 19th century is often overlooked since most Black people in the U.S. were enslaved during the antebellum period.  However, Spires noted, many Black people had access to literacy during this period; he referenced publications like Freedom’s Journal as evidence, as well as instances of Black people writing and reading about topics related to their experiences.  It is up to literary scholars to read and share a Black literary presence in American literature prior to Emancipation.

How does the foregrounding of Black Studies change the understanding of early American literary studies?  - Professor Jarvis McInnis

During their conversation, Spires framed the question “What does citizenship mean then and now?” as one of the core concerns in his work, and he shared during the following Q&A session that he often thinks about what can be learned through anti-racist pedagogy.

Professor McInnis asked Spires to share one of those archival moments that he had during his research that got him thinking.

When asked what advice he gives his students about being involved in social justice, Professor Spires said he encourages them to read and “seek to get involved at the ground level.”  Students and young people connect with issues that generate the energy of their generation.

Professor Jarvis McInnis, as a member of the Ad Hoc Committee on Anti-Racism, shared insight into why the committee invited Professors Spires and Cord Whitaker to be the inaugural guests for this Duke English speaker series.

“In a fall workshop with our English graduate students, we learned that while many students were committed to anti-racist pedagogy, they weren’t always sure how to approach it, particularly when their research did not explicitly take up race. So we inaugurated the speaker series to invite scholars whose work examines race in earlier literary and historical periods where it has been less common to do so. Cord Whitaker’s research examines how ‘race thinking’ in the medieval period informed modern conceptualizations of race, and Derrick Spires uncovers how a lesser-known cadre of African American writers and intellectuals theorized and debated notions of citizenship in the early republic, when the majority of African Americans were still enslaved. Through their impressive theoretical and methodological interventions and approaches to their respective periods, as well as the unique archives they assembled, Spires and Whitaker demonstrated for students and faculty alike how anti-racism can be integrated—or, dare I say, centered—in our teaching, training, and research. Significantly, both speakers insisted that anti-racist teaching begins with syllabus design: for Whitaker, this entails showing how “race-thinking” operated in canonical works such as the Canterbury Tales, and for Spires, it involves foregrounding black thinkers such as Absalom Jones and Richard Allen, who were actively theorizing citizenship at the very same time (and in the very same city!) that the “Founding Fathers” debated whether to outlaw slavery in the US Constitution. In short, Whitaker’s and Spires’s presentations gave us a wealth of exciting approaches for decolonizing our syllabi and diversifying our research questions, methods, and sources—important tools for achieving our goals of creating a more diverse and equitable curriculum and, ultimately, establishing a more anti-racist department and university.” – Professor Jarvis McInnis, Cordelia and William Laverack Family Assistant Professor of English

The Ad Hoc Committee on Anti-Racism speaker series has ended for this year, but the committee is currently considering ways to continue their work.