Learning, Away From Duke 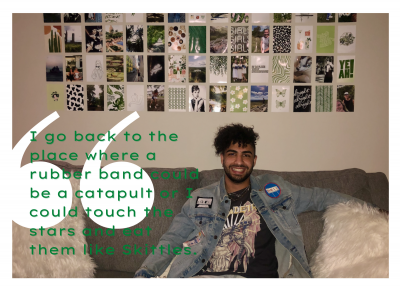 In spring 2020, Duke’s campus cleared out and the classrooms were left empty. Students returned home and finished out the semester over Zoom. Like so many others, Nima Babajani-Feremi struggled to learn online. As the strangest semester most of us have ever experienced drew to a close, Babajani-Feremi, a sophomore at the time, decided that another semester of “Zoom University” was not realistic for him.

Babajani-Feremi is no traditionalist — the bright yellow and blue floral print shirt he is wearing will tell you that — but he says he never expected to take time off from school. With that said, the English major is no stranger to creating flexibility in his academic trajectory. When he started at Duke, Babajani-Feremi planned to major in math and neuroscience. The pre-med track felt like a natural fit for Babajani-Feremi, who was  “a totally STEM-oriented kid in high school.” Babajani-Feremi enjoyed his differential calculus classes and was absorbed by the study of the brain. On a whim (or maybe to fulfill an ALP — don’t tell) he decided to take Introduction to Creative Writing. He was immediately enamored. All of a sudden, Babajani-Feremi’s analytical brain was overflowing with flowery stanzas and rhyming verse. After only a few weeks he decided to change his path — he became an English Major. Although he was unsure at first, he leapt in anyway.

Deciding to take time off school was a similar leap of faith. While he had found his passion with creative writing, taking time away from school shook the now English major’s idea of success. But Babajani-Feremi “just simply could not do online school again” and he decided to prioritize his mental health. Then, without missing a beat, Babajani-Feremi asked, “All right, what am I going to do with this time that I have given myself?” First, came the practical. In the fall, he began working at two different restaurants on 9th Street — “just making money” and “making rent.”

After his restaurant shifts, Babajani-Feremi diligently built his creative portfolio, writing poetry and short stories. He also applied to work as a tutor for a Stanford startup that “pairs students from top 20 colleges with high schoolers and middle schoolers to teach different subjects.” Juni Learning, which was originally set up to teach STEM, was looking for college students to teach creative and analytical writing skills. Babajani-Feremi was a perfect fit. He joined the Juni team the Spring of 2021 and now tutors around 20 students each week in either creative writing, grammar and mechanics, or analytical reading.

Babajani-Feremi, a devoted big brother himself, has formed a special bond with his students. “Oh, I love the students,” he gushes. While he claims he doesn’t have a favorite student (I think he’s telling the truth), he does have a favorite subject. Teaching creative writing is far and away his favorite part of tutoring. Even the mop of curly hair in front of his face cannot hide how Babajani-Feremi’s eyes light just talking about it. “Teaching creative writing is just so cool,” he says excitedly.

With his own teenage experiences in creative writing lacking, Babajani-Feremi is genuinely enthusiastic about creating space for exploration for his middle and high school students. “I never had a space to learn creative writing,” he says of his middle school years. “It was only when I got to college that I could take a creative writing course.” Now, his teaching with Juni learning grants him the “privilege” of seeing these kids get deep into creative writing, even before they reach high school. By exposing younger students to the technical skills he has learned throughout college, Babajani-Feremi hopes to give students the tools they need to “write by themselves and really pick up the joy for writing earlier on.”

But the joy of writing is not the only thing that Babajani-Feremi hopes to impart to his students. He wants his students to understand that writing can be more than a hobby. He says, “I want these students to see it as a feasible option” that is “just as viable and rigorous as STEM. I want them to know that this ‘writing’ thing is something they can be proud of, devote time to.” Babajani-Feremi himself has struggled at times to see writing as a practical path, but credits his Duke peers for encouraging him.

In his first workshop in college, Babajani-Feremi reveled in the opportunity to “read some of the coolest pieces [he had] ever read,” written by his peers — even as he held onto nerves about sharing his own work. These brilliant pieces were accompanied by brilliant mistakes. “Understanding how beginner writers write and the mistakes they make” let Babajani-Feremi see mistakes as a natural part of the creative process, and with a few nudges from classmates, he began to open up. As he entered into the creative dialogue, he got a handle on how to push his own thinking and had the opportunity to imitate and explore the discoveries of his classmates. These new writers inspired Babajani-Feremi but it was a seasoned writer — Professor Brenna Casey — who convinced him to stick with it.

He credits Professor Casey, his Introduction to Creative Writing instructor, as the “reason [he] actually explored creative writing” beyond the classroom. Babajani-Feremi says Casey was “the most fantabulous professor” he has ever had because she coupled deep technical knowledge with an abiding care for her students. He hopes that he can mirror this combination for his own students.

In this same vein, Babajani-Feremi also enjoys learning from his students as much as he enjoys teaching them. He says, “I think like we lose a lot as we age and [through my own] poetry I try to put myself back in the state of seeing the world the way I did when I was a kid — where I could be entertained by a stick and a rubber band for hours. I go back to the place where a rubber band could be a catapult or I could touch the stars and eat them like Skittles.” It is his students who have helped him return to this creative headspace.

Babajani-Feremi says of his students, “I use their eyes as best I can to asymptotically approach their vision of the world.” Humbly, Babajani-Feremi calls this world view “the cure.” Seeing the world through the eyes of his students keeps him from getting jaded and keeps him creative while he takes some time away from his own course work. But taking time away from school has very clearly not meant taking time away from learning. Nima Babajani-Feremi has become a better writer just as he has become a better teacher, and the passionate glow of his smile when he talks about his work — tutoring or writing — is remarkable. And why shouldn’t it be? Here is someone who, during COVID, has found “the cure.