I met Professor Jessica Stark when she taught my Introduction to Creative Writing class last spring. Focusing on themes of place and complacency, Stark led units on short story, poetry, and open form writing. Now completing her PhD and anticipating the release of her forthcoming poetry book, Savage Pageant, Stark has been awarded a 2019 Dean’s Award for Excellence in Teaching.

As an educator and poet, Stark enjoys teaching introductory creative writing courses. She also incorporates her interests in human rights and social justice into course curricula, as she believes that creative writing is an oft-overlooked “mode of interacting with the world.” Stark says that Duke students often approach the creative classroom as a break or reprieve from their schedules, so she challenges the expected model of writing and editing to make students feel more invested in the practice.

In one activity inspired by Frank O’Hara’s Lunch Poems (which were supposedly written during O’Hara’s lunch breaks at work), Stark encourages students to think about “movement, objects of everyday, and finding magic in how you attend everyday life.” In this way, commonplace sights “ignite when you give them due attention.” Stark builds this philosophy into her pedagogy. Her classes take walks together, leaving technology behind to walk through buildings and instead be attentive towards patterns they notice in the world before writing about them.

Non-traditional media plays a major role in both Stark’s teaching and her research. The poets she studies legitimated their own work by creating their own artistic communities. Stark calls this a “DIY ethos,” an important undercurrent in our current artistic moment that is impacted by social media and artists like Instagram poets. Zines and limited-run, self-published works are important in Stark’s pedagogical practice because they “reserve space to show students that [DIY] is possible in the contemporary moment.” Students in Stark’s Introduction to Creative Writing course read and study zines—and have the opportunity to create their own as part of the final, open form unit. Stark’s own poetry, too, incorporates non-traditional media. 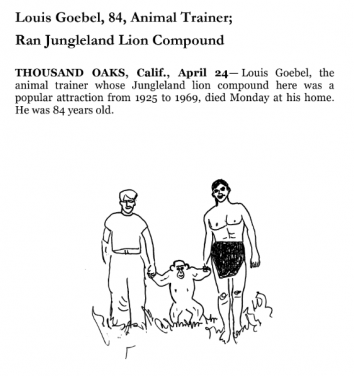 Savage Pageant, forthcoming with Birds LLC, is a “hybrid poetry text” featuring Stark’s own illustrations, materials from the internet, and bits of prose. The work focuses on a now-defunct zoo in Southern California called Jungleland, founded in 1926 by Louis Goebel, which housed Hollywood’s show animals. Stark became interested in researching the site because the park is such a “strange place, full of rumors and mis-truths.” Online, there are shoddy homage websites where older people share their memories of “hearing lions at night,” but little substantial, archival materials exist. Stark uses the park as a backdrop to investigate how we think about spectacle and celebrity, the use of animals in spaces like zoos and in film, and our neglected responsibilities for ecological violence. She also integrates personal experience into the work, tackling her thoughts during her first pregnancy while also teaching—and the “feeling of maternal spectacle” that she experienced herself. In the undercurrent of her writing is the idea of how the female body is treated as a spectacle of maternity and violence in American society.

With Stark’s gravity towards the DIY ethos and imagistic language, I wasn’t surprised to learn that her PhD dissertation is focused on 20th-century American poets and comics. The poets she examines, such as Ed Dorn, Jack Spicer, and Barbara Guest, use comic figures and draw illustrative materials themselves. “Popular materials [like comics] carry a reputation as separate from the intellectual elite, but they fluidly inform one another,” Stark explains. She thus looks at comics as an art form, and questions “what is it about subjective line that we are drawn to.” Comics may not be as representational as pictorial technology, but perhaps it has become one of the most successful forms of literature because “subjective illustration gets closer to truth than photography,” she suggests.

Jessica Stark plans to defend her PhD in Fall 2019, and will be teaching an introductory creative writing course on Nonfictional Hybrid Poetry in Summer 2019. After completing her doctoral studies, she will pursue work that allows her to continue her passion for teaching in the fields of creative writing and US poetry in tandem with community and arts organization.