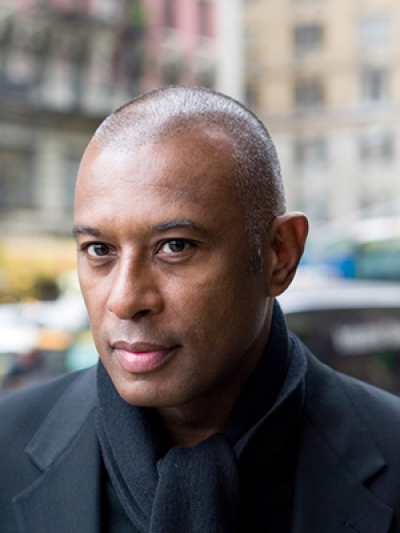 Writer Caryl Phillips, Professor of English at Yale University, returned during Fall Semester 2021 as the Blackburn Writer-in-Residence in the English Department at Duke.  During his visit, Phillips participated in a roundtable discussion, visited Duke English classes, and read from his work along with two English faculty members. 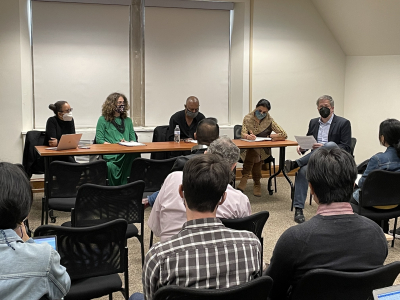 The Fall 2021 residency kicked off with a roundtable discussion focused on the topic “Race from an International Perspective.”  The panel consisted of three Duke English faculty members; Tsitsi Jaji, Ranjana Khanna, and Corina Stan along with  Professor Phillips.  Members of the panel were given only the title of the discussion and were allowed to go in any direction they chose.  English department chair Rob Mitchell pointed out in his introduction that the Duke English Department is unique in that it has many faculty members born outside of the US, including all three faculty members  on the panel.  The topic of this discussion was born out of the diversity initiative begun last academic year and lead to the development of the “Placing Race: Black Study in the World” working group, convened by panelists Professor Tsitsi Jaji and Corina Stan along with Professor Joe Winters and South Africa-based scholar Grace Musila.  Each member of the panel gave a brief presentation in response to the topic focused on thoughts and personal experiences, followed by a Q&A session.

In his opening contribution to the discussion, Professor Phillips compared his initial experiences in the United State to those of Eddie Murphy’s character Prince Akeem in the comedy Coming to America which premiered in 1988.  Much like Prince Akeem, Phillips had to learn to live with being Black in America, while not being a Black American.  Throughout his presentation, Phillips emphasized that the issue of race is not binary and as simple as black and white.

“His visit made the novel In the Falling Snow and learning experience more impactful for me, and I had a kind of a fan girl moment when he signed my book. Not only was I more motivated to read the novel carefully and compose well-thought-out responses, but also, I was interested to hear what Professor Phillips had to say about his characters compared to my own interpretations. He was incredibly kind, and it surprised me that he was unsure about the reasons behind some of his literary choices since he had written it so long ago.”  – Annette Lu, ‘25

“Professor Phillips always supported my ideas during discussion while offering context that completely enhanced his novel In the Falling Snow. His personal anecdotes provided reasoning for literary choices that even he had forgotten!”  - Anna Tornatore, ‘25

Professor Amin Ahmad shared a specific moment during Phillips’ visit to his class and some of the advice Phillips gave to the students:

"Professor Phillips was candid and humorous as he discussed advice on creating characters in fiction. He said that all plot is spun out of the contradictions existing in human nature. When asked how he got to know a character, he wrote "MFBS" on the board, and asked if anyone knew what that stood for. It was, "Mother, father, brother, sister." He said that by the time we are teenagers, our neuroses are in place, and that to know who a character is, we need to know about their families. The students appreciated his craftsman-like approach." – Professor Amin Ahmad

One of Professor Ahmad’s students shared their thoughts on Professor Phillips visit:

Phillips held one-on-one conferences with some English majors during his residency. Each student submitted a short story to Phillips prior to their meeting to review and discuss during their session. He shared personal writing experiences and advised the students on how to improve their writing.  He let them know that no one method automatically leads everyone to an award-winning bestseller.

“The conference was a wonderful opportunity. Professor Phillips gave me serious and insightful notes on what was working in my story and what was not. I was really struck by how much great advice he was giving out during his comments, too. Not only did he cover some specific topics on style, but Professor Phillips also discussed other writing projects (like screenwriting) and managing writing as a career broadly. While the conference was centered around a single short story, I felt I got a whole masterclass worth of information from Professor Phillips (and all tailored to my questions!). Several of these questions have bothered me for a long time, but I have never gotten adequate responses to them till speaking with Professor Phillips. I am extremely grateful for his notes and assistance and would recommend the conference to any other student writer.” - Akshaj Turebylu, 23

To conclude Phillips’ visit this semester the department hosted the Blackburn Fiction Reading.  Phillips was joined by English faculty members, Mesha Maren and JP Gritton, as the three writers each read from their works. Professor Maren read for the first time an excerpt from her forthcoming second novel Perpetual West, scheduled to be released on January 25, 2022.  Professor Gritton read an essay entitled “Years of Vanishing Completely,” a piece that he began writing during the COVID pandemic.  Professor Phillips read a section from his novel A Distant Shore. 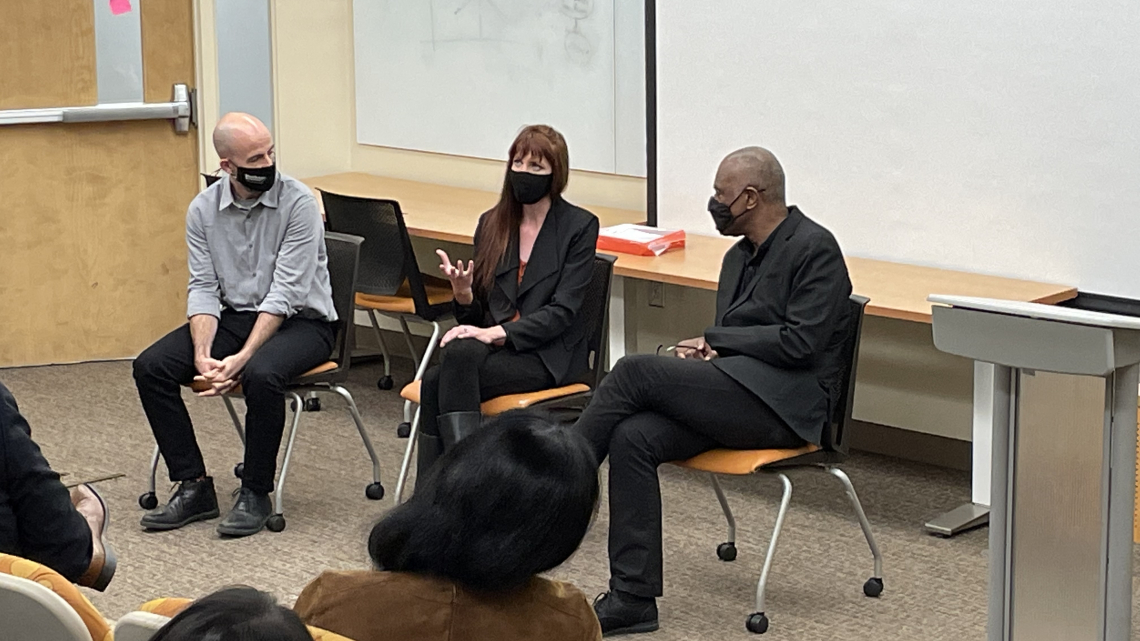 Following the professors’ readings, the floor was open for Q&A.  Duke English creative writing students in attendance were excited to have the chance to ask the trio about their writing experiences.  They asked about the authors’ writing processes, their attention to structure and form when writing, if and how to conduct research prior to writing a piece, and how to address criticism of their work.

“It was really interesting to hear professors who have taught me show their own work. I could see the lessons I have been told by my professors in their writing.” -  Nick Bayer, ‘23

Professor Phillips shared his thoughts on how this semester compared to his previous stints as the Blackburn Writer-in-Residence:

The combination of classroom visits, public events, and then one-on-one conferences with Creative Writing students allows me the opportunity to feel as though I’m contributing on a number of levels with the Duke English Department.  Also, this year it was nice to feel as though we were building on conversations that had already been started last academic year.